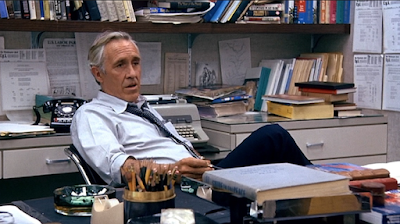 All the President's Men is one of those perfect movies. Based on a stunning true story with a brilliant screenplay from William Goldman (we've already gone through one of his scenes here with Butch Cassidy and the Sundance Kid), it's a movie that brings all of the elements of character, plot, and drama together in a way that makes me really love and admire it.

The scene I want to go through is one that comes during a particularly trying time in the film.

For those unaware, this film tells the tale of Woodward and Bernstein, the Washington Post reporters who cracked the Watergate story. And now, looking back on it, it all feels like one big victory, but it was marked by a number of defeats.

This is them reporting to their skeptical editor, Ben Bradlee (played brilliantly by Jason Robards) about where their investigation is at.


Immediately preceding Woodward and Bernstein walking in, a salesman is trying to sell Bradlee on features his papers doesn't need and the salesman in shooed out of the office. This might seem like just a funny bit of business but really helps establish that everyone wants Bradlee's attention. He's important.

And Woodward and Bernstein are literally nobodies at the paper and no one thinks the story they're working on is going to lead anywhere.

"Hey, what did you guys want?" Bradlee greets them. There's a warmth to it, but we further understand he's busy with no time for nonsense.

And when Woodward (Redford) drops what he clearly thinks of as a bombshell and it lands with a thud, the scene gains a tension to it. You can see it right there in the writing. Instead of reacting with a "Great, the story is going somewhere," he tells them to sit down, almost as though he's going to lecture them about something. His patience is wearing thin.

Then we get both Woodward and Bernstein (Dustin Hoffman) give us a dump of exposition. This isn't just them giving it to us as the audience, they're trying to assuage Bradlee's skepticism.

Bradlee is incredulous. "What else besides the money, where's the goddamn story?"

His patience is broken at this point and neither of our heroes are quite prepared for that. This revelation was their ace in the hole and it's not met with the enthusiasm they'd asked for this man's time for. They're skating on thin ice and share a pause and a look to exemplify that.

"The money is the key to whatever this is?"

"Says who?" Bradlee fires back. There's a lot of character work going on here. Woodward and Bernstein are the sorts of people unaccustomed to being challenged this directly. When they say something is important to each other, they mean it and understand it. But here, under the keen observation of their editor, they become unsure. But this says so much about the world of journalism as much as anything else, right?

They need to get the story right. And if he can't connect the dots, then the reader isn't going to be able to as well. And they're dealing with fire. They know what's at stake: either the paper or the fate of American democracy.

But then Howard Simons (Martin Balsam), the managing editor, breaks in with the story of Deep Throat, describing him as a garage freak and Woodward's source in the Executive.

And you can understand Bradlee's incredulity as he utters one of the best lines of the film: "Garage freak? Jesus. What kind of crazy fucking story is this? What did you say?"

In such a short space of time, the editor has gone from warm and friendly to really annoyed and skeptical faster than a Lamborghini going from zero to sixty. Then he hits them with the truth of the matter. He's defending them in public, but there's just nothing to their story yet.

There's something tender about his confusion and introspection that turns their revelation into a footnote and he looks up at them hopefully and says, "What else you workin' on?"

He doesn't want them to fail, but he doesn't see a way out of that.

Bernstein stumbles, looking for some hopeful avenue and offers a solution, but it's not good enough. Woodward's excuse is that they haven't had any luck yet.

"Get some," Bradlee tells them tersely. A perfect punctuation mark on the scene that's only enhanced by the curious pause followed by a return to a facsimile of Bradlee's kindly self. "Anything else?"

This is one of those scenes that function as something that is often overlooked in a lot of fiction I read and movies I watch. Those little moments that serve to spell out what it is the protagonists are doing while putting up more obstacles in their way and raising the stakes. The scene turns the emotion for them as well. The scene begins with a laugh and they think they've got something big and when they leave their determination has grown because they've been rebuked in the kindest way possible.

Too often I'll see scenes like this in books or movies and a character will literally say something like, "Let me get this straight...?" And the only purpose for it is so that the writer can restate the obvious for the audience, and that's boring. It's bad writing.

But in this context? They have to go to their superior who pokes holes in their arguments and meets what they think is solid information with incredulity they can't print. This is a minor defeat in their cycle of trying and failing. They wouldn't have even called this meeting if they thought they had something.

The scene also adds an undercurrent of trust in them, which adds a weight to their quest. Bradlee, this person they respect and fear, trusts them and has gone out on limbs to defend them. If they come up with nothing, they'll be letting him down as well.

Scenes like this can be throwaways in stories, but don't let them be. Add layers. This brings exposition, character building, an expectation of consequence, and a mini-defeat to our characters. All in such a short space. Think about moments like this and how you can bring more meaning to them.

As for my writing, I've had three columns come out in the last 24 hours and I'd love for you to check them out.

First was a piece for StarWars.Com about how the themes of Star Wars Rebels played out against the broader saga.

Second was a piece about how Star Wars Rebels was hiding all of the Force abilities we needed to know about to better understand The Last Jedi for Syfy.

And the last is a reemergence of my column about the links between Star Wars and classic cinema for /Film. This one was about how Rashomon influenced The Last Jedi.

--
As a reminder: Please join my short story Patreon here. Your contributions to the Patreon help me write more like this. When I hit 50 patrons, everyone will get a copy of Lost at the Con.


And please, please, please don't forget to check out any of my books, drop reviews of them on Amazon or Goodreads, and follow me on Twitter and Facebook!