October 20, 2005
So, I've decided to save the below "About Me" in amber, trapped in time, as it were and sort of start over from scratch since the mission of the site is a little different now.
I'm making a go of earning money for all of my writing. I'm working to convert my body of work here into something that will provide me some means of income that will justify how much time I spend writing in a day. I would really appreciate if you'd consider buying some of my stories and spreading the word.
So, enjoy the slightly outdated bio about myself below, I'll start a new one up in its entirety soon.
03/2010 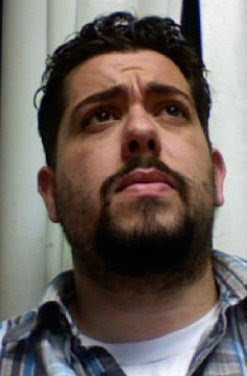 In a year or so (maybe longer, maybe less) I'm planning on self-publishing a lot of these into a volume with illustrations by professional comic book artists as well as some comic book shorts I've written and others have drawn. (I've been saying this for three years and it always seems a year away...)

In the meantime, I've collected some of the prose into a self-published hardcover. You can get it here. (I did this because I needed a few copies to give as gifts, so I'm still planning on making a bigger, larger version with professional illustrations.) If you want this first edition, though, click here to buy it.

In case anyone wants to know what it is I've written, I'm going to give the writing resume a whack right here. (in case anyone thinks I'm not qualified to bother with something like this)

I've written or co-written 19 and a 1/2 original feature length screenplays, 3 of which have been optioned, one has been made, 2 are hip-pocketed at the two largest talent agencies in the world (CAA and WMA) and an adaptation that Elias Pate and I did of a Graphic Novel (One Plus One, Oni Press, by Neal Shaffer and Daniel Krall) is currently in development with us attached as directors.

Elias has been my screenwriting partner for almost a decade, and we also polish scripts and do story work on the comic book Pirate Club, published quarterly by Slave Labor Graphics and drawn by our friend Derek Hunter. The three of us also collaborated on a short comic called Gamma Rae in Image Comics' Popgun Anthology.

I'm also working with an artist to bring a graphic novel about the Japanese interment during World War II to the public.

I've also co-directed (with Elias) both a feature film and a feature length documentary. I've also made hundreds of short films and produced a kick ass skate video.

In addition to all of my work in film, I'm also (still) in the process of revising a full-length novel I've written for publication.

Elias and I are finishing up a screenplay that we intend to start producing this year.

I also produced a $250k documentary about the American Obesity Epidemic. It's called Killer at Large.

I also blog occasionally at the This Divided State blog. I'm also a contributor to The Huffington Post. The Examiner. And I am one of the editors at Big Shiny Robot!

So. That's the scoop with me. I've written a lot. I write a lot. I plan to continue writing a lot.

If you want to hire me to write something or tell me how bad I suck, email me.

bench3 said…
This comment has been removed by the author.
2:32 AM

Culture Served Raw said…
Wishing you all the best, Brian!
3:08 AM

SusanE said…
Anytime I want to do something I set a start date. Then I tell people that is the date. I keep telling people that I'm doing it and when. I find after I've told one person it becomes real and I just begin stepping towards it.

I've had some great adventures that way. Writing may be more difficult use my technique, but maybe not.

I've always loved stories and writing, once I committed to doing it I simply have to, otherwise people will think I'm a quitter.
9:27 PM

Take care and thanks for your time
1:54 PM

Medicare said…
Mr Me, circa i am from allahabad, india. i wrote a short stories by myself and published it on my blog please read it and comment on it
6:29 AM

Greg Palast said…
Mr. Young,
You and your diseased publisher owe me $300 and an apology. I am a nice guy, really, but I do intend to find you and Gary and cut out your tiny hearts with a filthy knife.