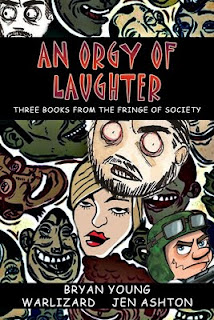 If you've been interested in picking up a digital version of Lost at the Con but haven't yet, you might be interested in a new three pack of humour books.

I've teamed up with Warlizard and Jen Ashton to put all three of our books together in one collection.

I'm going to assume if you're here that you know what Lost at the Con is about. (If you'd rather just pick up my book, you can do so at this link.)

As for the other two books in the collection:

THE WARLIZARD CHRONICLES by Warlizard

My new fiancée Betty and I were sitting on the couch, watching the Westminster Kennel Club dog show when she looked over at me and casually said, "My first orgasm came from a dog."

As I sat there stunned, trying to control my reactions and collect myself, I had two immediate thoughts:

1. Now I know why my dog likes her better.
2. I wish this were the worst thing she'd ever told me.

And so begins the descent into the crazy improbable world of Warlizard, an average guy with an exceptional life. With no excuses and no apologies, Warlizard lives his life by one simple rule - "If opportunity knocks, answer the door." Gulf War Veteran, womanizer and serial troublemaker, sometimes he wins, sometimes he loses, but his stories are outlandish, extreme, fast-paced and funny as hell.

TURDS IN THE PUNCH BOWL by Jen Ashton

Turds in the Punch Bowl is not your ordinary tale of friendship. Though unconventional in its material, this story is both hilarious and sweet. Meet Joe, the author’s quirky best friend, sidekick and, quite literally, partner in crime. A stunning mix between Seth Rogan, Alfred E. Neuman and Cosmo Kramer, Joe takes the author on a series of wild adventures spanning the last decade, from losing his dignity to finding his dad in a swinger’s club. Chock-full of irreverent wit and banter, this book is a laugh-out-loud narrative filled with unexpected moments of honest endearment within a friendship that anyone would count themselves blessed to have, but most aren't lucky enough to find.

Both books are very funny and I hope you'd be interested in checking out all three.