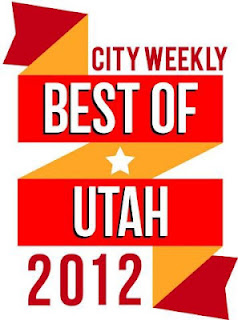 I was honored to receive 3 and a half awards in Salt Lake City Weekly's Best of Utah 2012 competition.

The first award was labeled "Best Self-Promoter", but when on to explain that it was for their being impressed with how much I accomplish in my life as a writer, filmmaker, columnist, and quizmaster.

Bryan Young is, hands-down, the busiest guy in Utah media that you’ve never met. Aside being a founder of Shinebox Media and Big Shiny Robot! (as well as a contributor to City Weekly), the writer and producer has a long list of projects that makes you wonder when he sleeps. Included in that list: Geek Show Podcast panelist, Huffington Post correspondent, author of five fictional novels, nationally regarded Star Wars expert (he’s received personal invitations to Skywalker Ranch), independent film director, pub-quiz host, and soon—we hope—seller of an energy drink of whatever is keeping him going.

Hopefully, it'll get people to check out my books.

The second award was a readers choice for Best Pub Quiz in Utah, which I co-host with Shannon Barnson:


If the dozen other quiz nights in Salt Lake City just aren’t geeky enough for you, don’t retreat back to the basement: Head over to Lucky 13 for the weekly Big Shiny Geek Show Pub Quiz. It’s a totally local quiz night, hosted and written by Big Shiny Robot’s City Weekly columnist Bryan Young and the Geek Show Podcast’s Shannon Barnson. Answers are read out after each round, so you won’t have that “What was the name of Star Wars’ concept artist?” question nagging your brain for long. And with the excellent Lucky 13 burgers, fries and friendly waitstaff, it’s no wonder the quiz sees crowds of loyal regulars pack the place each week, trading insults and jokes with the hosts.

If you want a taste of the quiz, be sure to pick up my collections of trivia on sale on Amazon and Barnes and Noble.

The third is for Best Local Cable Show for The Big Movie Mouth-Off, starring Jeff Vice and Jimmy Martin, which I produce with Elias Pate.


Jeff Vice and Jimmy Martin have fast become the biggest names in televised movie reviews in the Salt Lake City area, and it’s no mistake. Filmed at one of our favorite watering holes, Brewvies, their funny, beer-fueled Big Movie Mouth-Off is funny, entertaining and insightful, even when they’re dead wrong about a movie. And their Facebook page is the site of dozens of movie giveaways every month, as well as offering a daily reader poll, making it a must-like.

The half of an award is the second place win for Big Shiny Robot! for best site in Utah. Last year we squeaked out blogger Gavin Sheehan for the top spot, this year he squeaked us out. Congratulations to him and everyone else who won this year!

I also participate on occasion (and film) another award winner for best podcast, The Geek Show Podcast. It was a very good year for everyone I know.