June 20, 2012
As many of you were aware, I've been doing lots of conventions and signings in the last few weeks to promote the release of Operation: Montauk.

First was Origins Game Fair, where I was a guest of The Library. The Library is a collection of writers handpicked by Jean Rabe who teach writing seminars, participate in their anthology project, and sell books. It's filled with luminaries such as Mike Stackpole, Aaron Allston, Timothy Zahn, Gregory A. Wilson, Jennifer Brozek, Steve Saus, Don Bingle, Sarah Hans, and a dozen others.

It was a fantastic time and I learned much as a writer, a bookseller, and as a person. I also met a lot of fantastic people (see the list above, plus some) and interacted with a lot of people interested in being writers and I did my best to keep them on their path.

As soon as I got back I did a pair of hometown signings at The King's English Bookshop (where I read the first two chapters to a rapt audience) and another at Dr. Volt's Comic Connection.

With less than a week for a break, I was off again to the first ever Denver Comic-Con, where I broke my record for books sold and signed in a three day period.

I also ran into this guy dressed as the Goon: 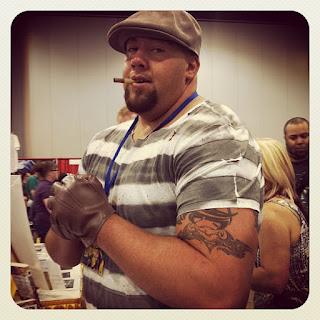 And these guys dressed as the Green Goblin and Kraven the Hunter: 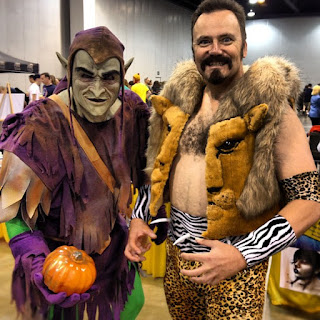 I also met a lot of fans, old and new. Perhaps one of the most satisfying moments was when a gentleman came to my table, bought a book, and asked to shake my hand, thanking me for my years of Star Wars journalism. He, too, was a fan of the prequels and my articles helped him realize that he really is part of a silent majority.

Operation: Montauk also got another review, this time over at The Huffington Post:

The characters are well thought-out and developed with interior lives and histories that indicate Mr. Young's dedication to researching the various timelines they came from, and in the case of the spaceship-traveling pair, making up believable but fantastic details.

(You can order the book in the store, or snag it on Amazon.)

I learned a lot about what you should have ready at signings and convention appearances and I wanted to pass some of it off to you writers out there:
Hopefully those are some helpful tips for those of you who are about to go out and sell your book.

And if you feel so inclined, you should buy copies of my books, signed in the shop, on Amazon, or Barnes and Noble.