Monsters! and an Origins Recap...

I'd highly recommend you check it out. The stories in these books are cool, the artwork in both books is great. You're going to want them both. There are stories by Michael Stackpole, Timothy Zahn, Aaron Allston, and dozens of other writers you like, even if you haven't yet heard of them yet.

You can click over to the kickstarter here directly. $7 will get you an eBook and your name in the back, $10 gets you the eBook of both books. It's an offer you can't refuse.

This collection began as the convention exclusive from Origins Game Fair last year and so I was able to reconnect with a lot of the authors whose work stands next to mine in the collection. It's quite an august group and I'm proud of the fact that they keep asking me to come back every year.

One of the things I love is being able to talk to other writers about their process, even if it's just in the context of a panel we share. Even though I was there to impart my wisdom, I can't think of a single seminar I sat in on where I didn't learn something from one of the other presenters–even if it was an example of how not to handle myself.

The convention was a great refresher for me, too. I came back creatively recharged. I talked a lot about the theory of stories, I talked about the problems I'm having in manuscripts, and I helped other writers diagnose their problems. I spent a lot of time imparting what little bits of information I've accrued, sure, but it's highway robbery. I got far more than I gave and they're all too satisfied by my answers to know it.

One thing I did a lot while I was out of town was writing. I made sure to keep to my writing schedule while I was there and come home with a few thousand words of new material that I didn't have before and I did it in the usual manner. I got up before everyone else, grabbed some coffee, and went to the convention center early. I didn't lose any momentum on my work and I actually feel pretty good about the work I did, proving to myself that it's possible to write every day, even when I'm busy at a convention.

While I was there, I also got a bit of good news. Upper Deck published a game that I did a modestly small amount of work for: 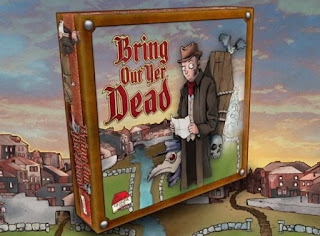 Back when it was being developed, I was asked by my friend Max Holliday from Ginger Ale Games to write some flavor text for the rulebook. They had the game and the skin for it, but they didn't quite have the story for the game. That's where I came in. On the front of the rulebook is a three paragraph introduction to the world I wrote. When they sold the game to Upper Deck I just assumed my work would get swept away, but it's all in tact. They gave me a copy of the game and who knows what other game work might come of it.

If you're interested in buying a copy, the only option at the moment is to preorder it from Upper Deck here. If there are more ways to do it in the future, I'll be sure to let you know. I had a lot of fun working on the game, but much more fun playing it.

I love playing board games, and I love writing. So would it come as any surprise that I'm designing my own game as well? I've written a rule book and am working on a prototype for playtesting. When there's something there to talk about, you'll hear more about it.

As for my normal writing, I'm still just working on drafting my fantasy novel and a sci-fi novella. As far as revisions, I'm about to dive back into revisions on "The Aeronaut" based on the latest round of notes from the editor. I'll be damned if this isn't a book I'm going to be proud of. 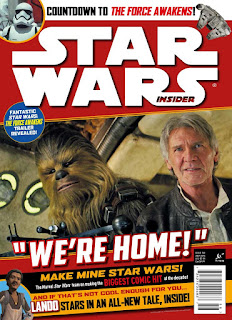 As for other work that's come out, my piece on Jar Jar Binks hit newsstands today in the new issue of Star Wars Insider (Issue 158), so be sure to check it out. It made Jonathan Wilkins' highlights for the issue on StarWars.Com as well...

And then, my most recent column for StarWars.com is about the Battleship Potemkin and its influence on the Star Wars saga. You can read that piece here.

One bit of work you might not know that I do: as part of my day job, I write, voice, and edit historic documentaries on the Salt Lake City area. The most recent one was a lot of fun and if you're at all interested, I'll post them here as they come out.


That's about it for this week.  As far as my work outside of these things: I remain busy for Big Shiny Robot! and Full of Sith.
As a reminder, you can get tickets to Stuff You Missed in History Class's first live episode in New York in October (which, coincidentally, will feature me) right here.
And don't forget to check out any of my books, drop reviews of them on Amazon or Goodreads, and follow me on twitter and Facebook!