September 15, 2015
I'm pleased to announce that my collection of space opera short stories, Escape Vector, will be available for purchase at Salt Lake Comic Con. You can order it now from Amazon and have me sign it at the show or snag it from me there. Digital versions will be available shortly. (UPDATE: The book will only be available at the show in advance in an advanced state, apparently. The final release will be in October.) 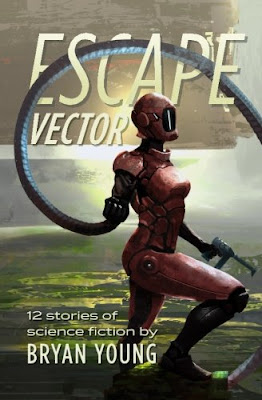 I'm incredibly proud of this collection, and I think it's a great cross section of the space opera shorts I've been publishing over the last few years in other publications and a host of new stuff that I'm confident you'll enjoy.

It contains twelve stories, including one starring Twelve and Zeke from The Serpent's Head.

I'm very proud of this collection and I think it's much more representative of where my writing is at. It's sometimes hard working in slow motion, the stuff you're seeing published from me is what I was writing one, two, sometimes three years ago. Since I'm writing every day and learning every day, I always feel like I'm not putting my best foot forward. I am, as much as I can, but it can feel daunting at times.

But, like I said, I'll be signing these and selling a limited amount at Salt Lake Comic Con, so be sure to snag one here or there.

As for The Aeronaut... If all goes well, it will be available for pre-order soon and its on sale date is November 11, 2015.

I'll have more information about that soon.

As for Salt Lake Comic Con...  I'll have a booth with Big Shiny Robot! and will be signing books there as often as my panel schedule will allow.

Here's my panel schedule, and be sure to check Big Shiny Robot! for all the panels our robots will be on.

You can get tickets to the con here, and I would recommend double-checking my schedule with the app.

The latest episode of Full of Sith came out and it's two hours of my interviews with Vanessa Marshall and Peter Mayhew from Star Wars Rebels and Star Wars. It's something that Star Wars fans will want to listen to.

I've done some cool interviews this week that will have some pieces soon. You'll enjoy them. I promise. I just hope I can make it through Comic Con.