December 08, 2015
Ursula K. LeGuin wrote some of my favorite fantasy books, even though I only managed to read them this year. The EarthSea books were absolutely incredible and, although I was late to the game, I became a large fan of Ms. LeGuin's.

And then I saw this video of hers:

She's accepting National Book Foundation's Medal for Distinguished Contribution to American Letters here, but the speech is incredible and it called upon us as writers to imagine worlds with alternatives to capitalism. We live inside of capitalism. "Its power seems inescapable," she says to us and I have a hard time disagreeing with her. "So did," she continues, "the divine right of kings."

And here she's hit upon my favorite thing about writing fiction. That we don't have to be trapped in the world as it is. We can imagine it as we want it to be and inspire others to think about it in this way as well. How many of us weren't inspired into science by Star Trek and its increasingly attractive egalitarian society? How many of us loved to see futures (and pasts) where there's an equal and diverse society without the ills of our, at times, racist and bigoted world, pressed down upon it? How many of us love reading stories about heroes who overcome the evil of societies that they then topple?

I love reading stories about a better society. I love watching them, too. And I love living it. What is Walt Disney's Tomorrowland other than a beautiful window into the tomorrow that could have been?

As I wrote my last novel, I tried to remain cognizant of this as I wrote, not inflicting any of what was on my world, but what could be. Though there are certainly still bleak elements in the world, political systems that remain oppressive, the world is absent of that pervasive inequality of genders. It's freeing to come up with a better way of doing things without falling into the traps we've been given in modern society and the status quo.

The rest of LeGuin's speech is worthwhile, too, about publishing and art, I suggest you watch it in its entirety.

But your assignment this week is to think about ways you can make people think differently about the completely entrenched and unfair systems in your life and what you could do to show your readers a better place.

As for my writing this week, I've got a new piece up on StarWars.Com, another edition of my Cinema Behind Star Wars column. It's about Richard Marquand's 1981 film Eye of the Needle which really blew me away. You can read it here, feel free to comment on it and share.

I also started a new gig writing about Star Wars for HowStuffWorks.Com and my first piece is about keeping the secrets of Star Wars. 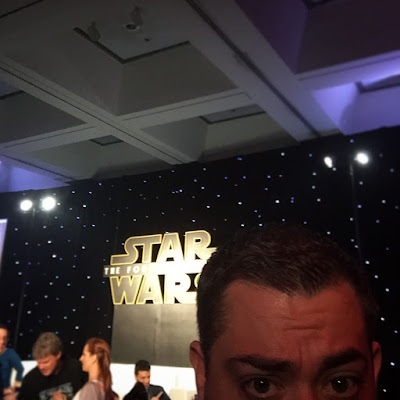 I also went to probably one of the biggest, most important, and most exclusive events I've ever been to: the press junket for The Force Awakens. You can read more about that event here at Big Shiny Robot! or listen to it on Full of Sith.

As for my prose writing, I'm still plugging along on this book my kids asked me to write and I'm still on track to finish before the end of the year, which is thrilling to me.


As a reminder: The Aeronaut and Escape Vector are still out and still need your purchases and reviews. If nothing else, they can use you telling people about them. If you want signed copies, visit the shop here on this page.Then, The Serpent's Head and Operation: Montauk are both in a Storybundle. The cost is "name your price," and they're packaged with a whole slew of other books worth checking out. Go ahead and snag them here. Also! here's a list of "rules and guidelines" I've been collecting over my years of studying writing advice and process. There are links to dozens of essays I've written about each individual bullet point and I think some people find it helpful.