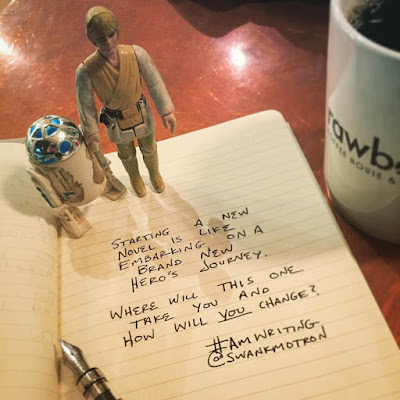 At the moment, I'm working on a screenplay in addition to drafting my 11th novel. It's how I learned the art of story structure and how the moving parts of a story worked. I wrote or co-wrote a dozen screenplays before I turned to write my first novel and it was an invaluable experience.

Granted, the first thing people asked after they read my early drafts of my early work was, "You were a screenwriter, weren't you?"

It showed. They really are different media, and it can be easy to ease too far into one or the other, but I think both are valuable forms of storytelling. I mean, at my day job I work with telling stories with moving pictures every day, and at night I work with words. Or the morning, rather. I still find advice people dole out to screenwriters valuable to all writers, though. In fact, I pretty much insist anyone who is interested in telling stories read Robert McKee's Story. And then re-read it every time you're plotting a new story.  (Tip: you can get the equally helpful audiobook version with your leftover Audible credits...)

But the screenplay I'm working on is heavily inspired by the work of Kurosawa. He's one of my favorite storytellers, and I sought out some advice of his as I worked.

I found some pretty great quotes that I think apply equally to novelists, short story writers, and anyone else that wants to be a professional storyteller.


"In order to write scripts, you must first study the great novels and dramas of the world. You must consider why they are great. Where does the emotion come from that you feel as you read them? What degree of passion did the author have to have, what level of meticulousness did he have to command, in order to portray the characters and events as he did? You must read thoroughly, to the point where you can grasp all these things. You must also see the great films. You must read the great screenplays and study the film theories of the great directors. If your goal is to become a film director, you must master screenwriting."

I think this obviously holds true for anyone. You need to read and watch thoroughly any sort of medium constantly. If you're not consuming all manner of stories and evaluating how and why they worked, yours will be nothing special.

Then, here's another piece about how to read (or even watch movies) in order to accomplish this endeavor:


"I‘ve forgotten who it was that said creation is memory. My own experiences and the various things I have read remain in my memory and become the basis upon which I create something new. I couldn’t do it out of nothing. For this reason, since the time I was a young man I have always kept a notebook handy when I read a book. I write down my reactions and what particularly moves me. I have stacks and stacks of these college notebooks, and when I go off to write a script, these are what I read. Somewhere they always provide me with a point of breakthourgh. Even for single lines of dialogue I have taken hints from these notebooks. So what I want to say is, don’t read books while lying down in bed."

I think this next piece is one we all struggle with in every book or screenplay, and it's helpful for me to understand that even the greatest of storytellers struggled through the same thing:

"At some point in the writing of every script I feel like giving the whole thing up. From my many experiences of writing screenplays, however, I have learned something: If I hold fast in the face of this blankness and despair, adopting the tactic of Bodhidharma, the founder of the Zen sect, who glared at the wall that stood in his way until his legs became useless, a path will open up."

And finally, this piece about working every day toward your goal. I have no patience for people who tell me they don't have time to write because they absolutely do. If they really want to, if it's something that's important to them, they will.

You can replace Kurosawa's profession with any profession or lifestyle and the words still ring true.

"Those who say an assistant director’s job doesn’t allow him any free time for writing are just cowards. Perhaps you can write only one page a day, but if you do it every day, at the end of the year you’ll have 365 pages of script. I began in this spirit, with a target of one page a day. There was nothing I could do about the nights I had to work till dawn, but when I had time to sleep, even after crawling into bed I would turn out two or three pages. Oddly enough, when I put my mind to writing, it came more easily than I had thought it would, and I wrote quite a few scripts."

As far as my work being published lately, the new Star Wars Insider came out and it contains the first part of one of my favorite pieces. 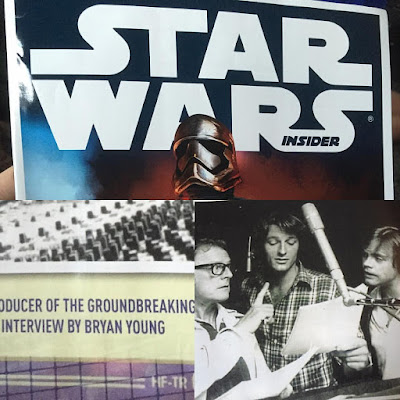 I was able to interview two people I greatly admire as storytellers in the media of radio and film: John Madden and Tom Voegeli. Madden directed one of my favorite films, Shakespeare in Love, and together he and Voegeli were responsible for the Star Wars radio dramas from NPR. It was a fascinating behind the scenes interview and worth your time to check out.

As a reminder: The Aeronaut and Escape Vector are still out and still need your purchases and reviews. If nothing else, they can use you telling people about them. If you want signed copies, visit the shop here on this page.Also! here's the full list of "rules and guidelines" I've been collecting over my years of studying writing advice and process.
As far as my work outside of all this: There's a lot of great stuff on Big Shiny Robot! and Full of Sith for you.