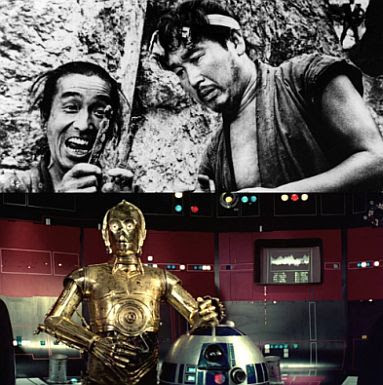 Have you ever heard the phrase "you are what you eat?" Or that you're equal to the sum of your parts? As a writer and a storyteller, you learn by consuming stories. The tools you have to craft those stories are themselves crafted from every story you've ever consumed.

Naturally, many writers and storytellers ask themselves how far they can push inspiration and homage so as not to be seen as thieves or plagiarists.

It's a fair question, but I think it's one that far too much attention is paid to. We consist almost wholly of the stories we're told. Whether these are films, movies, or even just the stories you're exposed to by your friends and family, you're soaking in content and learning how it works. They form part of your experience and they impact you in a way they impact no one else. What I might find interesting about one story might be completely different for you.

That's the part you need to embrace.

There is nothing wrong with taking something you love, finding the angle you love the most about it, and expanding on that in your own way in your own worlds. This is how Samurai films and Flash Gordon got remixed into Star Wars. It's how 30s adventure serials got remixed into Indiana Jones. Every single one of Quentin Tarantino's films is a mish-mash of influences he's cobbled together from a thousand films no one has ever seen. Ernest Hemingway thought Mark Twain and Flaubert  the end-all-be-all of writers and his goal was to beat them with his own spin.

It's not about the material you're taking to remold, it's how you view it, how you perceive it, and how you reshape it into something new.

And here's the problem: it's almost always not a conscious effort.

You need to consume so many stories. And that stuff will percolate. And then suddenly you'll be caught off guard by a story. And I'll tell you this: if you get through a rough draft and you realize it's too similar to something you know and love, then you're in for a treat. Because that means you get to revise to make it better than the thing you love. And since you already love the thing in question, you're going to have fun working on your story, because you can bring that love and enthusiasm to it. But that's what's unique about it. It's your enthusiasm.

There will still be people who say that you're a ripoff. And that's okay.

They're small, unimaginative people. And maybe they don't understand things like passion and enthusiasm. It's something very cynical to say.

It's something I hear a lot, too. I write the Cinema Behind Star Wars column for StarWars.com and I can't tell you how often people tell me that Lucas was simply "ripping off" people rather than "homaging" and "being inspired by." But that's because they don't have the ability to look at a thing and ask, "What if it was a little different?" "What if it was done this way?" "Or that way?"

And you do that because you're a writer.

You are the secret ingredient that makes your writing different than anyone else's. This is the same reason I'm not worried about people stealing my ideas. For one, ideas are a dime a dozen. For two, it's how the ideas are implemented that makes a story unique and fresh. And maybe there's a bit of ego there, too; no one is going to write one of my ideas better than I am.

Instinctively, you know what a rip-off is. If you are worried you're going to get hit for plagiarism because your work is a carbon copy, then yes: you're probably getting too close to being a rip-off. But other than that, just don't spend the energy on it.

--
I've been battling with a bit of a down streak lately and haven't been posting my recent works or on this blog as often as I'm supposed to, so there's a lot here, but it's all good, I promise:

For the official Star Wars website I've been writing a ton:

Star Wars at Salt Lake Comic Con is a recap of what happened at the show. And it was a lot and it was amazing.

The  was about Mace Windu and the downfall of the Jedi.

The Cinema Behind Star Wars was all about the film Silent Running.

And, for How Stuff Works, I wrote about the 50th anniversary of Star Trek.

I was also a guest on the Stuff You Missed in History podcast talking about writing and how I research my historical fiction. You can listen to that here!

As a reminder: You can join my short story Patreon here.