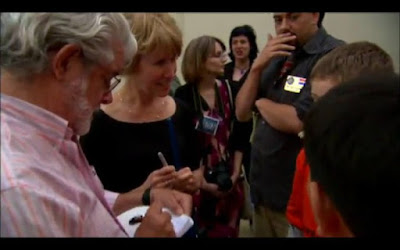 In many social situations, I'm a talker. I like to think of myself as a raconteur, but it's more just like I don't know how to shut up. At least in the right situation. I've done a lot and know just a little bit about so many different things, it's easy for me to find something to talk about with people. When I can come out of my social anxiety shell, I actually like talking to people. But there are times when I can't really talk, I don't have the energy, emotional or physical, to do it. Instead, I just drink in the surroundings.

It's something we writers have to do. We have to take in all the input we can. And sometimes that means shutting the hell up and just listening. Listen to your friends tell their stories. Listen to how they talk about other people and describe them. Listen to the words they use. Listen to the emotion in people's voices as they're talking. Watch how they talk. What sorts of things they like to talk about. Listen to them tell the stories of others.

It's the same thing you need to do when you're reading. Take in every bit of data and store it. These are the sorts of things you can draw on when you're writing. Every bit of experience, information, data, they're all used to tell better stories the next time you're working on one.

I've learned a lot of how to listen in doing interviews. Interviews force you to search for questions that will get your subject to tell the best story possible. And they force you to listen to your subjects deeply, searching for follow up questions. It's almost never about the input you have to offer. That is something that teaches writers a great skill. Have a natural curiosity when you're talking to people and throw your ego out of the equation: don't worry so much about expressing your point of view, worry about hearing the best story you can.

To that end, I'm interested in hearing from any of you. Email me. Tell me about what you're writing. Tell me what you're working on. I want to listen.

I've noticed that just by listening, you can help people work through their stories. Just today, a friend was telling me that he was blocked on his story and I was asking him about the problems. Just by explaining to me what was wrong, he was able to pinpoint the issue and I didn't have to suggest anything, he'd solved the issue on his own.

There's a power in listening.

Learn to harness it for your craft.

You won't regret it.

--
I've written quite a bit lately. First, I have a piece that came out for Salt Lake City Weekly that they titled "Emperor Trumpatine."

StarWars.Com put out a piece I wrote about everything we know about Rogue One.

I've been busy writing other stuff as well, so look for it soon.

I also got to go to Skywalker Ranch and ILM over the weekend and that wasn't a small thing. I'll be writing about it more. But I'll probably tie it all up in my coverage of going to the premiere of Rogue One this weekend.