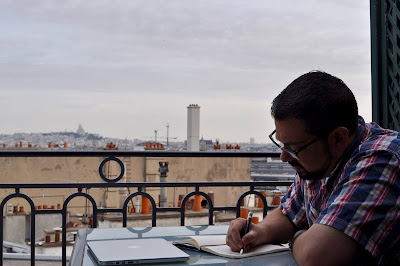 I'm not going to quit being a writer.

I'm not going to just give up.

But for many writers, that's a thing that comes up in their mind. That they could quit. That they might. I mean, I'm not here to tell to stick with it or to leave. That's obviously a decision you'll know is right for you. But I read recently that the writers you see aren't the best, most talented writers. They're just those that didn't quit.

And I take a little bit of offense to that remark.

Not quitting is part of the talent. It might even be a talent of its own. But should you quit? Personally, I don't think so.

I  read another article that's been making the rounds the other day. The headline? "If you want to write a book, write every day or quit now." I'm not sure how that advice helps anyone. I happen to write every day. That works for me. I'm not going to quit doing that any time soon. But I wouldn't presume that's the path every writer needs to take. I know people who write in bursts. Or they go six months writing and six months researching. Or they just write on weekends. Whatever. It doesn't matter, as long as you're putting the work in. The shape that work takes is up to your process.

There was another horrifying statement in the article and it implied that the author viewed other writers who didn't quit as competition and that he hated them.

Let me say this: This is NOT a competition among writers who have decided not to quit. We all need to help each other stay in the game. And get a leg up. Not eat each other alive.

If a writer would rather compete and not help fellow writers, that's their choice, but they're going to have a lonely time of their career.

So, really this all boils down to two things: don't quit and support each other.

Even if you don't get published, there's a lot of value in writing for personal reasons. If you find it cathartic, why quit even if you're not getting published?

Ignore bad advice and keep writing at the pace that fits your process.

I've had a few pieces come out in the last few weeks, but the biggest might be for the 40th anniversary of A New Hope over at StarWars.com. I dove into a huge research project that got into the weeds on the original reviews of A New Hope.

The May Patreon story came out as well. It's called Dreamscape and I hope you enjoy it.


And please, please, please don't forget to check out any of my books, drop reviews of them on Amazon or Goodreads, and follow me on twitter and Facebook!