Doing it Over Again 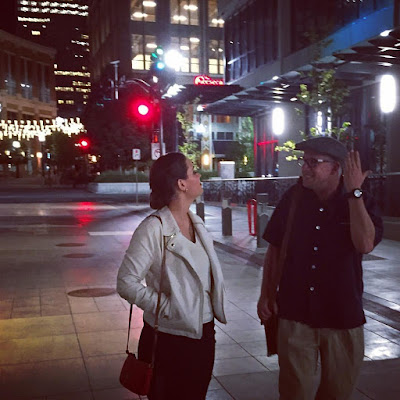 Last night was a great night. It was the last official shoot for my short film. It was a reshoot, though, and that gave me the vague sense of deja vu.

It's expensive and time-consuming to reshoot something. There are a lot of balls to keep in the air. Not only do you have your cast and their schedules to juggle, you have your camera people, makeup department, sound person, etc.. You also have your own time you have to manage. It's a difficult thing to get a group of adults that large together for anything let alone something that even mildly resembles work.

So when you call everyone and ask to do something over, it's a big deal.

But the end product is going to benefit for it so much, even if it's hard, so you do it, right?

That's what this night of reshoots reminded me of in my writing. Sometimes it's just so hard to redo a scene or a piece of the structure. Every moment ripples toward others and, in a long book, a minor change at the beginning could have monumental consequences at the end. But you do it because you want a better book.

For this scene we reshot, it was to replicate all the work we did on the first night of shooting. The lighting wasn't quite right. It was too cold. The camera was having issues. One of the audio packs was being problematic. We shot until almost 3 in the morning and so the takes toward the end of the night were far more exhausted than the beginning, making them even harder to cut together. There was every reason to redo it, but for a brief time, I told myself it was good enough.

It's important to look at every scene of your book with an eye that critical. See what went wrong and see how you can address it. When I was editing the rough cut of the short film, the issues I had the most problems jumped out at me. So I tried to redesign the scene in ways that would allow me to address my issues and make the scene better. We changed the location and the lighting situation. We tweaked dialogue. We shot on a warmer night. We brought different audio equipment. And then we did it all over again.

The end result? A better movie, despite all the extra work.

And this taught me a lot about writing, too. It's much easier to tear the walls out in a novel than it is in a film. So why do I get overwhelmed and hem and haw about doing revisions that are "hard?"

Revision is a difficult part of the creative process. Things don't always work out the way you want them to and changing them can be difficult. But that's just part of molding the clay and refining the final form, right?

Ask yourself what advantages can you give yourself to make things better. Is it a change of location? Different players? A different crew? Think about what would help you accomplish your goal better and then make the call.

The only one stopping you at that point is you.

The only one stopping me is me.

The biggest thing I've written and had published is this piece on Wonder Woman and her importance for HowStuffWorks.


And please, please, please don't forget to check out any of my books, drop reviews of them on Amazon or Goodreads, and follow me on twitter and Facebook!