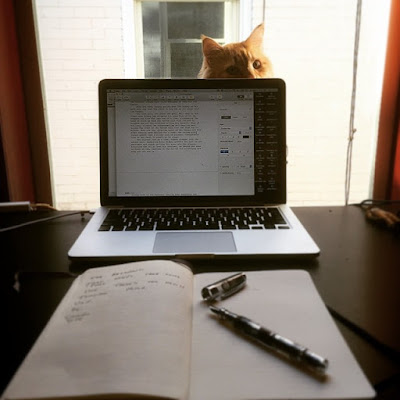 I've been swamped in edits on my fantasy novel lately and I've had some friends in the process of editing as well. Naturally, we've all been talking about things and one asked me if I would write a blog post about editing, specifically about word choice.

And that's a lot of what editing is, right? Word choice might be the single most important part of a manuscript. I mean, you have to choose every single word in your novel. How do you revise to maximize the impact of your word choice?

Well, there are different strategies I take for that. For me, editing is a pretty layered and long process, so take all of this with a grain of salt, too. But, as I go through drafts of a novel, I first have someone else read it and they'll be able to tell me what my bad habits are. For this novel I'm working on right now I had a few. First, I would use sentences that included phrases like "seemed to" and "began to." These are really passive and add extra words for no real reason. So as I make notes on my draft, I circle these sentences so I know to remove them. Sometimes they stay, but more often than not they leave.

The next thing I watch for are sentences where pronoun use is iffy. I always want to make every sentence clear, so I have to go through every sentence and think about how the pronouns are working or not working and how they might create confusion. If any confusion is possible, then I rewrite. I'm amazed at how often this is an issue. When you're in the heat of writing something, it can be easy to track who is doing what, but as you come back to it later and try to go over it as though you were reading it for the first time, you might find that the sentences just don't sing. They don't have the clarity they need and they don't say as much as they need to. Why would someone "seem to" be something? Unless you're talking about disguises and first impressions, then you should avoid the word. And "begins to?" This one is the worst for me. You either do something or you don't. If your character is completing a multi-step task and you say "they begin to" do something, signifying that first step, why not just break the action into definitive, miniature steps? It will give the audience a clearer picture.

Another thing to look for is adverbs. I'm not one of those sorts that believes that you have to excise every adverb, but more often than not you can find a better way to phrase something that adds to your story and gets rid of adverbs altogether. So, for example, we had a speech tag:

"Here I am, talking," Bryan said, angrily. "You're just going to have to do better.


What if we could illustrate that in a way that said angrily without actually saying it?

"Here I am, talking." Bryan pounded a fist on the desk and raised an accusing finger. "You're just going to have to do better.


Yes, it added some words, but didn't it give you a better picture than the first one? It creates anger. This is the sort of thing I try to be conscious of in the first draft, but sometimes those first drafts get away from you. But look out for it in the second draft and you'll find that there is plenty of room for improvement and you're going to make your novel a whole lot more vivid.

The other thing to look for is stale word choice. You'll be surprised how often you'll see a word twice in the same sentence. Or the same page. Or whatever. And the more common the word, the easier it is to get away with this. But if you're using a word like "foofaraw," the only way to get it into your book more than once is by putting it in the mouth of a character and that character happens to say it a lot. In the action, you get a word like that once. And if you open your novel with, say, a fire-breathing dragon attacking a village, you want to come up with different words for the carnage. You might be able to use flames and villagers once. You'll need to come up with a lot of different ways to say it so the scene doesn't seem stale or repetitive.

Read your stuff out loud to make sure you're not saying words too often. It's going to help you figure out where you need to switch things up. Do it. A lot, if you have to.

So, that's my small, blog-post-sized version of looking at word choice in revisions. If you have anything to add, feel free to do so in the comments.

--
I have a new piece in City Weekly about Salt Lake Gaming Con.

I will be at the convention on Saturday as well. I'll be on two panels. The first is about making Star Wars roleplaying games feel like Star Wars. The second is an interview with Steve Blum, who some might recognize as Zeb from Star Wars Rebels. Come out to the con, come play a game. See me. It'll be fun.

---
As a reminder: Please join my short story Patreon here. Your contributions to the Patreon help me write more like this. When I hit 50 patrons, everyone will get a copy of Lost at the Con.