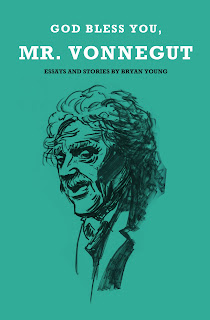 It's hard to believe that we've been able to manage five years on this Earth without the wit, wisdom, and moral compass of Kurt Vonnegut.

The man influenced me more than most have. Reading his work is like visiting an old friend, his writing is warm and inviting, sharp, funny, and any of a hundred other positive adjectives.

When I learned of his death, five years ago today, I felt as though I lost a friend. The idea that I'd never read another biting essay by the man, or another new book, was not an easy one to come to terms to.

Over the years I've written a number of stories and essays that I felt were directly inspired by Vonnegut and I published them in a book called "God Bless You, Mr. Vonnegut." In it, I gave background material about my personal and one-sided artistic relationship with Vonnegut and how he influenced me over the years.

To commemorate Vonnegut on the fifth anniversary of his passing, I want to give some copies of the book away in a way that honors the man in some small, probably insignificant way.

In order to win one of the three copies I'm giving away (though that number might go up depending on how much response this gets) all you need to do is hit up your twitter account and tweet about what Vonnegut's influence was on you and tag it with #GodBlessYouMrVonnegut.

If you don't have a twitter, hit me up here on facebook and tell me how Vonnegut inspired or shaped you.

short story lover said…
Vonnegut is one great author. He inspired many
3:43 AM