March 04, 2013
I have been incredibly busy over the last month and many things have happened. To that end, I wanted to give you all an update and let you know I'm still alive and still writing.

To start with, I've been doing a lot of revising. I finished a revision of The Serpent's Head, top to bottom, and it's now with readers and an editor as we speak. This is my second overhaul of the book and I'm really excited to bring it to you guys.

I'm also working with an artist about a cover, and I'm very excited about what's been planned there, too.

With The Serpent's Head, we're still on track for a Late May/Early June release. 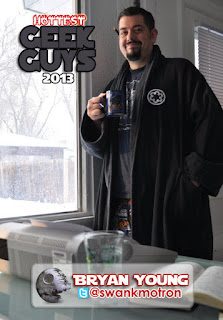 Yeah. Somehow, beyond all reason, I was put on a list of The Hottest Geek Guys of 2013 by The RedEye, which is in The Chicago Tribune and The Los Angeles Times.

I also took a road trip to San Francisco with my son, which was a great time. We took a tour of ILM, ate in the Lucasfilm Cafeteria, attended the season finale screening of The Clone Wars, and spent a whole day at Rancho Obi-Wan. You can hear all about those exploits on the Full of Sith podcast, or read about them over at Big Shiny Robot!

I got to reveal some exclusive scoops at Huffington Post as well, one about Tim Curry joining The Clone Wars, and another about MAD Magazine's takeover of Batman #19.

I think those might be the biggest things (aside from work) that have been occupying my time lately and prevented me from giving you guys an update. There will be a couple of announcements about more cons I'm going to. And if there are any you would like to see me at, be sure to let them (and me) know.