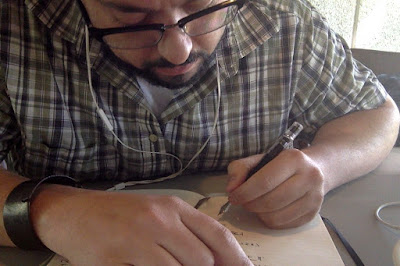 I'll be honest. I've been putting off writing a blog post for about a week now.

Between being overwhelmed by the writing projects I'm working on and the fact that I'm querying three different books and getting almost daily rejections, I'm just not in a place where I feel like I can offer any advice whatsoever. What do I think I have figured out that I could possibly teach you?

But then I realized that maybe showing that vulnerability is exactly the thing I could show you. Because we all have it. No matter how hard we try to make it appear as though we have things figured out, no matter how put together we seem to be, we're all still just tearing a piece of our soul and smearing it across a page.

That makes us feel like a raw nerve. Vulnerable. Exposed.

I think we have to embrace that vulnerability. It's what makes us writers, right? That sensitivity is what allows us to find ourselves in the shoes of others and helps us figure out how to write from their perspective.

Some parts of that feeling can drag you down though.

I have to put those parts of that feeling away and just bury myself in the work. That's why coming and working on this blog post was so hard. I've been burying myself in other things. But it's time to crawl out of that grave.

So, for this post, I figured I'd just acknowledge how low I currently feel about my writing and pending career and give you an update about what I was working on.

The four big projects I'm toiling away on most are all my own work.

First: Just a couple of days ago I finished taking all my notes on my first readthrough of my fantasy novel (which I'm calling, at the moment The Shadow Aspect.) It's almost 700 pages printed out in manuscript format and it was vital that I went through it sentence by sentence. Maybe that's part of my current vulnerability, too. I'm going through page after page of rough draft and asking myself why I thought this was good enough to put down on paper the first time. I have to remind myself that it's the nature of revisions. I slapped the clay onto the table with that first draft, now I finesse it and really mold it.

Second: I'm working on a science fiction serial. I'm almost 20,000 words and 5 chapters into it. I think I might release it as part of my Patreon. So far it's been a lot of fun. It feels like a cross between Robotech, Flash Gordon, and Star Wars. I've been making the most progress on this and I feel like I can't wait to unleash it on people. On the other hand, I'm currently convinced it's probably terrible.

Third: I'm drafting a novel. It's a horror novel set in my childhood. Thinking and pondering about that has been draining emotionally. To put it mildly, I had a pretty bad childhood. So working through some of these issues and recreating the setting on the page has been another strain on how I've been feeling about my writing. I'm hoping I can be proud of this when it's done, though.

Fourth: My short film isn't going to storyboard itself. So, I'm working on that a lot, too.

There are a hundred other little things I'm working on, too. I've been posting reviews and news at Big Shiny Robot!, I've been podcasting for Full of Sith and Fauxthentic History... I've gotten all my regular freelance work done.

And I've been toiling away at the day job 40 hours a week.

Right now it just feels like it's too much. It probably is. But I don't know of any better way to deal with it but to just keep wading through it.

I also need to realize that it's normal to feel like this. And it's part of the process. And it happens to everybody.

So, with that realization, I'm going to keep on working.

As for my work that's been coming out lately, the biggest piece has probably been my latest Playlist for StarWars.Com. It's all about Captain Tarpals.

I also wrote a piece on being a responsible nerd adult for Salt Lake City Weekly I'm pretty proud of.

Salt Lake Comic Con is coming up fast, too. I'll be posting my schedule for that soon, but at this point I'm on at least 17 panels and doing at least three live podcasts: an episode of Full of Sith, Fauxthentic History, and Stuff You Missed in History Class.

--
As a reminder: You can join my short story Patreon here.