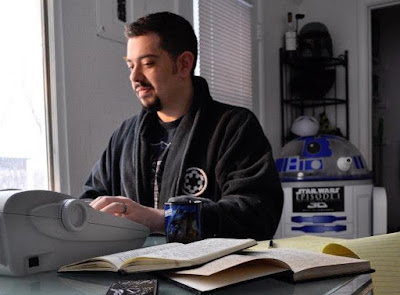 What is it that keeps me writing?

I think it's a fair question. I write a lot. Not just stories for novels or short stories, but non-fiction. Journalism. Criticism. I write every day. Today is my 408th consecutive day of writing.

The artsy answer that I'm supposed to give you is that I write because I have to. I'll die if I don't. Why do I breathe? Same answer.

While that's certainly true, I often feel that need, it's not the only reason I write. It's just some of the reasons I have for writing aren't the easiest to talk about. We all carry reasons for writing that never come up in conversation. Not because we don't believe them or they're not true, it's just easiest not to get into it.

For me, there are many.

I'll be honest: I try to remain humble and I constantly assume I'm screwing everything up, but that's not to say that my ego doesn't play a part in why I write. I know I can tell stories better than many that are being put to readers by publishers. I know I have something unique to say. I know my perspective on things is one worth telling people about.

It's hard for me to say I'm "better" than someone. But I have to at least feel like I can learn to be a better writer than most out there.

So yes, my ego plays a part in why I write.

My world view is another significant contributing factor.

I believe in art and artists. I believe truly that self-expression, artistic expression, is important and that a portion of the population should be paid livable wages to create art. Every city should have a house band, a poet laureate, a novelist and painter in residence, and more. They should have a dozen of them. What is life without art? How do we relate to and empathize with each other if not with art? How would that work with stories and writing?

This is a mission I find worthwhile. For myself to better understand humanity, and for me to help pass that understanding on to others. Not every story can make the world a better place, but it's a goal I have. It's something I want to keep in the back of my mind.

Fun is another big factor in why I write. If I didn't find writing fun, I wouldn't do it. It's as simple as that. That's not to say that it has to be easy. Fun can, and often is, hard. But there are few feelings on Earth, to me at least, that are as exhilarating as the feeling I get when I put words together and add them up into stories. That feeling is compounded as I near the end and I know the climax of the story is coming. Then, the part of my brain that cares about structure and craftsmanship is doubly exhilarated when it's time for revisions. I can knock out walls in my story, write in new characters. Like a doctor, I take pleasure in diagnosing a problem and satisfaction when I write a prescription that cures.

But one of the biggest reasons for me is the one I have the hardest time talking about.

It's scary. Or at least it can be. It's at times terrifying if I spend too much time thinking about it.

But I write to leave some piece of myself behind. I'm a neurotic; I think too much about my pending death. I'm also an atheist and so I know that once my time is up, that's the end. So those two things war with each other in my mind. How can I maintain some bit of myself for the future and how can I make the world a better place to be in while I'm here?

If I can take some piece of myself and put it into words, that's a tangible part of my soul I can leave to my kids and their kids and so on. One day, long after I'm gone, with a fond nostalgia for their father, my children can crack open a book and visit what it might have been like to be in my head at one point in time. Perhaps I can spend time with them that way, long after I've shuffled off this mortal coil. They'll know me. They'll know what I believed. They'll know me by what stories I found worth telling.

That's kind of an immortality, right? And, aside from the joy of watching my children growing up and the companionship of my significant others, writing is the only salve I've found to soothe the burn of the knowledge that my consciousness will eventually cease to be.

That's a hard thing to admit. The universe is vast and expanding and we're mites of dust on that scale pretending we're important and once our minuscule lifetimes are over, we're snuffed out without a second thought. Hard, but, to me, true.

There might be other reasons I write. I want to entertain myself. My kids. My readers. Things like that.

But these are the big ones.

Is it self-expression? Is it a balm for your existential crisis? Is it to make the world a better place?

Whatever your reasons are, think about them. Write 'em down. Consider those reasons when choosing what stories you set out to tell.

Before we leave, I'm curious if you might have noticed a couple of things I left out...

These are not reasons to write. There are ways to get those things with a lot less blood, sweat, and tears than setting out to make a career as a writer.

And it's true. But this isn't your path for that.

So find your reasons. Tell me what they are. Or keep them to yourself. The important thing is that you have them.

As for my writing this week, I had a new piece come out for StarWars.Com. The Cinema Behind Star Wars: Leon: The Professional. This is one of my favorite movies and it was a treat to write.

I also interviewed Scott Snyder and John Romita, Jr. for their work on All Star Batman which was a lot of fun.

I've been hard at work finishing up storyboards for my short film and revising the fantasy novel. I'm also drafting a sci-fi serial I'm having a lot of fun with that's about to break 20k words and a horror novel set in my youth that's outlining nicely.

I'm going to start work this week on the August short story for my Patreon as well.


As a reminder: You can join my short story Patreon here.