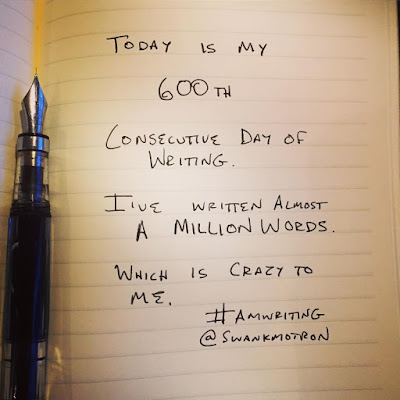 One of the most important skills I think writers need to cultivate is discipline.

For the last 600 plus days I've put my butt in the chair and written. There have been days when I haven't felt like it. There were literally days where I was in the hospital. There were times when I was so distracted by Star Wars that I could only eek out a few hundred words. But I made a commitment to discipline that I would sit down and write every day.

It was important for me to learn how to sit down and write even when I didn't feel like it.

Part of the inspiration to learn that discipline was this quote from Neil Gaiman:

“If you only write when you’re inspired you may be a fairly decent poet, but you’ll never be a novelist because you’re going to have to make your word count today and those words aren’t going to wait for you whether you’re inspired or not.

The process of writing can be magical. …Mostly it’s a process of putting one word after another.”

It made me really think that if I wanted to be a professional, then I would need to sit down and do the work no matter what. In the last 600 days, I've written more than a few novels, dozens of short stories and hundreds of articles. I sit and write whether I'm inspired or not. It doesn't matter if I feel like it, the words need to come.

What I'm not doing, though, is telling you that you need to park your butt in a chair and write every day. Your level of discipline and my level of discipline might be two different things. I track my word count every day and know what my output is like. I know some people who don't like looking at those metrics at all. I know some people who will write every day for two months, then back off and plot and plan for another six, then write for two more months straight. There is no right or wrong answer as to what that discipline looks like for you, it needs to fit with your ability and mental health needs, but it does need to be disciplined.

You need to push yourself a little bit, too. Take on a little bit more than you did the day before. Or the week before. Or the month before. I have friends who thought the 50,000 words in a month for National Novel Writing Month was a crazy proposition at first. But, with a little bit of discipline, they're breaking that every month now without a sweat.

If you don't want to add that discipline to your writing, understand that it's okay to be a hobby writer. Or a writer for self-expression. Or a writer for catharsis. If you can be all of those things at once with some discipline, though, there's nothing wrong with that, either.

So what will your added bit of discipline to your writing look like? Will it be writing every day? Will it be completing one short story a month? Will it be setting realistic deadlines for yourself and then actually working to complete them? I'd be interested to hear.

As for my writing recently, I do have a new short story on the Patreon for you to check out. It's called The Conservationist and is about a rogue park ranger.


--
As a reminder: Please join my short story Patreon here.  Your contributions to the Patreon help me write more like this.