An Oasis of Time and Space

November 17, 2015
I find the most important tool in getting my writing done is prioritizing the time and space to write. People ask me where I find the time to write, and I tell them, "I get up early and write."

To me, it's seems that simple, but I realize it might not be for everyone.

John Cleese, the writer and comedian, called it his "oasis of time and space," and I think everyone can find a little bit of that. Some people find those oases and fill them with working out (which I need to do more of) or with playing video games (which I don't need to do more of). There are a thousand things you can prioritize, from sleep to better eating, and writing is just one of those things.

But it has to fit naturally into your schedule in a place where you're not likely to bump it or forget about it.

This is my oasis of space.

The coffee shop isn't terribly busy at that time of the morning. Most of the traffic comes by the drive thru, rather than inside the shop. The only other regulars at that time of the morning are a group of retired old men who have been gathering at the shop to read their papers and socialize for a decade. We'll exchange pleasantries occasionally, but they leave me alone because they know I'm working. Sometimes, I'll put my headphones in to signify this, but not play music. I'll listen to them talk about this and that. It's good people watching.

When I first started coming into the shop years ago, I didn't realize I'd sat down to work at their usual table. Bob, the first one there every morning, would come in and give me a sour look and stake out another table. And then as soon as I'd leave, they'd retake their preferred spot. I did this for months until the owner pulled me aside and said, "Hey, man, you're in their spot they like. They've been coming for years."

So I picked a different table the next day and they've treated me like one of their own ever since.

But part of that is not engaging me in their conversation if I'm busy. Or have my earbuds in. Or even look busy.

And this is my oasis of space. My oasis of time is that block between 6am and 8am, when I have to leave to walk to work. As long as I'm thinking about writing and my stories in that period, it almost doesn't matter if I get words written or not. Sometimes I will feel stressed if I don't feel like I've gotten enough done but, if nothing else, I'll have advanced the story in my brain so the next day's writing will go more smoothly.

My ritual in the morning is pretty standard, if not compulsive. I'll arrive, order my first cup of coffee, black. And then I'll write in my moleskine as a warm up. I'll talk about goings on from the previous day, I'll ask myself questions about my stories, I'll write down striking images that my brain has been thinking about, I'll even write down dreams and bits of new stories or interesting word pairings that come to me.  Sometimes I'll make posts like this one from this morning: 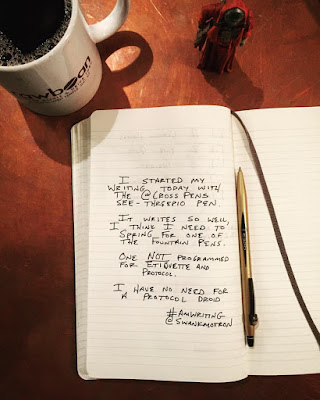 And once this is done, I'll write down a to-do list for the day and draw square check boxes next to each task. And then, finally, I'll open my computer. I close all windows to the Internet, open my manuscript, and note the word count I'm starting from in my notebook. It's important for me, for some reason, to keep track of how much I'm writing every day. And in every month. And in every year.

I'm not sure why it helps keep me going every day, but that's my process and it works for me.

Warning: what works for me might not and probably won't work for you. You need to figure out where that sweet spot for you is. I've found that for me, getting up early in the morning, my brain is at its freshest and I give myself my most valuable writing time. I'll work later in the day or evening on the freelance gigs for others.

You might find on your way home from work, stopping in at a bar works for you. Or writing in your bedroom at 4 in the morning fits your schedule best. You need to go on a quest to find what that time is though, and you need to settle into a routine that works for you. It needs to be your oasis.

Hopefully, this peek into my oasis is helpful.

As for my writing this week, I've been incredibly swamped with a super-secret project you might not find out about for months. But it's been a great challenge. It involves almost 40 different essays and it's been a workout for my brain, to be sure. I'm also this close to done with my fantasy novel. By the time I post on here next week I hope to have finished it. There's only a couple of chapters left.

And that's what's going to keep me moving forward. I got some rejections today that felt like losses, but the more I think about it, they were minor setbacks and not really bad news at all.

That's when I think about all the other stuff I have going on:

First, we'll be doing our monthly reading series "Write Out Loud!" at the library in Downtown Salt Lake. It starts at 7pm on Thursday and will be in the lower conference room this week to accomodate the crowd I expect to see from NaNo. You can get more information here at the library's website.

The next big thing is my book release party. We'll be celebrating The Aeronaut and Escape Vector, I'll be selling and signing books, haning out, and talking about writing. It's on Friday night at 7pm at the Watchtower Cafe at 1588 S. State Street in Salt Lake City.

It would mean the world to me if you could be there if you're in the vicinity at all. You can check out the Facebook event for it here.

Then, The Serpent's Head and Operation: Montauk are both in a Storybundle. The cost is "name your price," and they're packaged with a whole slew of other books worth checking out. Go ahead and snag them here.

I have two pieces coming out in the next issue of Star Wars Insider that you should pick up as soon as it hits the stands: the first is an interview about writing the Darth Vader comic with Kieron Gillen. The second is a feature on the creatures of the prequels with quotes from Pablo Hidalgo, Travis Beacham, Vanessa Marshall, and many, many others. You can check out a preview here.

That is, I think, it for this week, but I could have forgotten something, but if I did, I don't remember.