November 24, 2015
I've made a conscious effort to read more in 2015. I was writing so much in 2014 that I let my reading slip behind. I didn't quite realize how much reading less would affect me, but I knew it was having some effect.

In 2015, I committed to read at least one book or graphic novel for every week of the year, hoping I'd be able to fit that into my schedule easily enough. I've read far more than that by now, but I have to say that I'm having the most productive year of writing in my life, which is the opposite of what I thought would happen. I thought that if I dedicated more time for reading, it would naturally take away time for writing. And while it did that here and there, I found that it actually made my writing time more productive.

I also made it a point to read books outside of my normal comfort zone, as well as fantasy books that would help me avoid pitfalls on my own fantasy novel that I was preparing to write, and then began on during the year. I found that reading far more helped me think to the way others solved problems in their manuscripts easier. And reading writers of genres outside the ones I was most comfortable in gave me ideas about how to tackle problems in my storytelling in normal ways.

I know the advice sounds obvious: if you're going to write a lot, you need to read a lot, but it's something that can easily get lost in the shuffle of a busy schedule.

You need to constantly be refilling your creative tank. Reading a wide variety of books from all kinds of different authors will expand the vocabulary and phrases you use to describe people and things, it will also expand your breadth of experience, and expose you to new ideas and perspectives.  All of these new ideas will shade how you see things and how you think about them. This is a good thing.

The most important thing, I think, is to read stuff that's just not what you'd choose if you were reading for leisure, but read it for leisure anyway. One of the first books I chose this year was a novel by a sports writer (Frank DeFord) called Bliss, Remembered. It was about a swimmer during the Nazi Olympics in 1936. It wasn't that far out of my zone, but far enough that it was a stretch for my normal reading habits and came away refreshed. I also read a book that reads like Plato's Republic but instead of government it deconstructs poetry, which is so far out of my strike zone it's ridiculous. It was called Silent Noise . Now, I know a lot more about poetry than I would have thought possible AND it made me think about what it would be like to write a deaf protagonist. You can check out all the books I've read in 2015 so far here, but suffice to say, it's an eclectic mix and has made me a better writer for it.

And even though I've spent more time reading this year than last, my wordcount is through the roof. In fact, I'm on track to have written 100,000 words in November 2015 alone. And I think reading more is one of the things that has given me the edge to get there. That and discipline, consistency, and practice, but reading helped a lot, too.

Try it. Commit to read more. I'll selfishly suggest one of my books to start. But do it. Think about what works in a book and what doesn't and think about why...

It will help. Trust me.

Also: my book release was a great success. Thank you EVERYONE for showing up. A lot of writing was talked and many books were signed and sold, it was as good a time as I could have imagined.

Here's a photo that sums up the event nicely, snapped by Gavin's Underground. 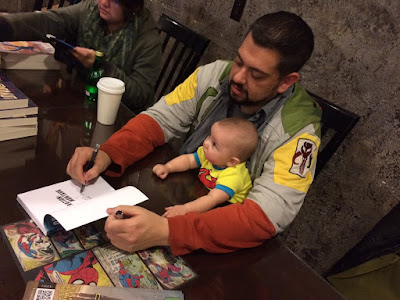 As far as work published elsewhere, I've got a new piece at StarWars.Com: The Cinema Behind Star Wars: American Graffiti, and it's a fun. I really love doing these. It forces me to rewatch movies that I love and explore new movies I might have never seen, and movies, to me, are really as nourishing creatively as books.

I'd also remind you that The Aeronaut and Escape Vector are still out and still need your purchases and reviews. If nothing else, they can use you telling people about them. If you want signed copies, visit the shop here on this page.

Then, The Serpent's Head and Operation: Montauk are both in a Storybundle. The cost is "name your price," and they're packaged with a whole slew of other books worth checking out. Go ahead and snag them here.