Before we get to that, though, I want to talk about writing and keeping up momentum. As many of you, perhaps even most of you, know, November has been designated as "National Novel Writing Month." NaNoWriMo for short. For many, this is the kick in the pants they need to throw down the 50,000 words it might take to give them their first novel.

For me, since I'm consistently churning out novels pretty much at all times, I use the month of November to do my best to increase my daily word count and create better writing habits. I wrote my first novel before NaNoWriMo was even a thing, but when I began my second one, it seemed like something that would help kick me into gear. Using the stats and graphs NaNo gave me, I could see that I wasn't prioritizing my writing every day. I'd write a lot for three or four days, then I'd let life and work get in the way and let my word count plateau. Then, I'd binge on writing for three or four more days, making sure I'd keep level with the par. The next year, my goal was to even that pattern out and try to ensure I wrote every day. And that worked. I was writing every day when I put my mind to it.

The next year, I wanted to write more words in the days I was working, but I didn't want them to be sloppy, I wanted to be able to produce quality words quickly. I think that year's goal worked out well enough. It's not up to me to determine the quality, but from my perspective I was able to produce more work of a rough, near-publishable quality.

This year, I've already been writing every day fairly consistently. As I write this, I'm on my 129th consecutive day of writing. I kept that streak alive through three conventions, travel to Atlanta and New York, and a nasty bout of pneumonia. I'm pretty confident I'll keep it up for a while yet, the only thing I could see derailing it is the release of The Force Awakens, and I'm trying to figure out how to fix that. But because I was already averaging between 1500-1800 words a day in the run up to NaNoWriMo, my challenge to myself was to finish the 50,000 word challenge by the halfway point.

In order to do that, I would have to double my average daily word count and I wasn't sure that was possible.

I've never written anything this fast before, and I'm looking at the words I'm writing and finding that I don't think they're terrible.

And that's what NaNo is all about, at least to my mind. It's about challenging oneself to do more than you've done before, in the name of creating better writing habits.

And so far this year, it's worked for me.

For those interested in what I've been working on, I'm deep into my first epic fantasy novel and I'm having so much fun writing it, it's ridiculous. When you see it, eventually, I really think you'll like it. Or love it. I don't know, I'm not you.

In news about me: the first big thing is that the first part of the audio for the live Stuff You Missed in History Class I was a guest on is out! You can listen to it here. Part two will come out tomorrow.

We talked a lot about this specific drawing, too, so if you're wandering in looking for some more insight into the book, here you go: 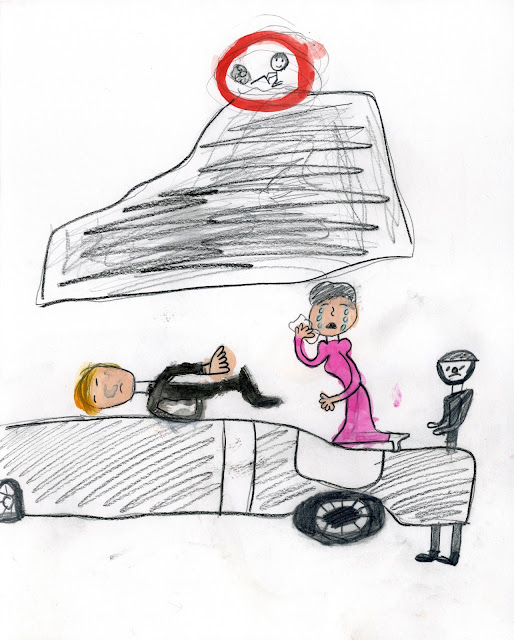 It was a great time and I absolutely loved being able to be a part of my favorite podcast. Seriously, if you're a writer and are looking for idea fodder, there's no better place than Stuff You Missed in History Class. Just start at the beginning and listen forward. (After you listen to the episodes I'm on.)

As a reminder, you can pick up copies of A Children's Illustrated History of Presidential Assassination on Amazon or you can get signed copies from me through the website here.

Next on the list is something of which there will be more news tomorrow or late tonight. I've been asked to participate in a StoryBundle, and you'll be able to get The Serpent's Head and Operation: Montauk as an eBook with a whole bunch of other books for a really great price. Check Storybundle for more info or check back tomorrow.

And... probably the biggest news for me this week is the release of The Aeronaut. It comes out tomorrow and this is your last chance to pre-order a copy. If you buy a print copy from Amazon, you can get an eBook copy for free. Just head to Amazon to do that. If you'd like a signed copy, you can get that from me here.

As ever, it's my ardent hope that you're able to pre-order copies of these books. It will certainly help show your support of me considerably.

As far as other pieces I've written, my latest Cinema Behind Star Wars column for StarWars.Com went live. It's about George Lucas's first feature film, THX 1138. Read it, comment on it, let people know you like it.

That's it for today. I'll be back tomorrow with more info on the bundle, the release of The Aeronaut (there are events coming!), and the new episode of Stuff You Missed in History Class.