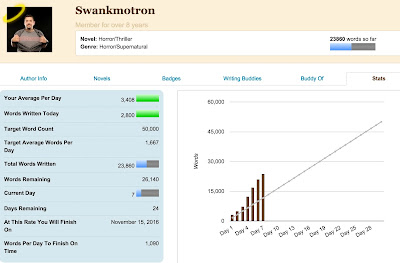 It's been a week of furious writing, but I've got almost 25,000 words of a novel to show for it. And most of a short story.

There's something great about National Novel Writing Month that always kicks my ass into gear and makes me want to get so much more done. Part of it is the community. I love being able to interact with other writers who are going through the same thing I am. More often than not, writing is a bizarre and lonely process. I don't get to talk in specifics about what the issues of a day might be. Being around non-writers most of the time means that, at best, I'll talk in vague generalities. Maybe I won't even mention the problems I've got in my work. But during NaNo, that all changes.

There's a support system of people that seem to exist, like fairies in the woods at night, only during November. They have chatrooms and write-ins. I don't feel like such a shut in all the time.

I find that it's also good for me to be keeping track of my word count using their daily tracker. If it were available all year, I'd use it every day and I'd probably write twenty times as much as I do. It also adds a competitive (but friendly) spirit to getting your word count up.

So what has been the challenge for me so far? I think the biggest challenge has been the book itself. This is by far and away my most complicated book to date, but I think I say that every time. I go out of my way to tell stories in different ways or with new techniques every time I start a new novel. I don't think I'd learn as much if I didn't go out of my way to try out new things with every novel. It was something Aaron Allston encouraged in me. He said at our last writing retreat before he passed away that he was always excited to read my work because I was always finding new ways to screw it up. "But that's not a bad thing. You're always correcting the previous issues, you're trying new things. That's remarkable."

I'm paraphrasing him, of course, but that's the gist of what he said.

NaNo helps me make those mistakes slightly more quickly than I ordinarily would.

I've also had more than a few days on this book that felt unreal. Like everything just clicked together, the research I'd done, the anecdotes I wanted to relate and incorporate, and the story and characters themselves. It all just clicked in a way that made flying through 3000 words a cinch. Sometimes, especially as we head into week two of a marathon of writing, it can already start to feel like a slog, but this time I feel like I'm just getting started.

Maybe by week three my attitude will change, but I'm really excited to get people to read this novel eventually. I think it's going to be something special.

Part of that is challenging myself personally as well. Some of the themes in the book are very close to me personally and hit home in a way I don't often explore. And the book itself is set in my hometown in the year I first moved there, so being able to revisit my old impressions and memories has been an incredibly interesting double-edged sword. On one hand, some of the bitterness I had about my upbringing has been hard to take, on the other hand, revisiting some of the most incredible experiences of my life has been a wonderful trip down memory lane. It's a roller coaster, just like my childhood was, I suppose. And if I can infuse some of that into the book and make it more authentic and honest, then that will be good for everyone.

As for my writing I did a new piece for Salt Lake City Weekly about an Open Door Policy for being a nerd. You can read it here.

Holly Frey and I released a new episode of Fauxthentic History as well, this one is about the Legend of the Bounty Hunters' Guild. You can listen in here.