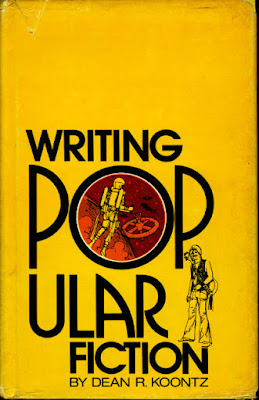 I like to read a lot of books about the craft of writing. Probably a full ten percent of the books I read are about the craft of writing. The vast majority of books have some bit of wisdom or inspiration I'm able to take away from them and incorporate into my own writing. I'd been reading Dean Koontz books since I was ten and was looking for more craft books to read and found that he'd written this one.

It's long out of print. It was published originally in 1972, and by then Koontz had already written in excess of 40 novels. In many ways, it's useful because he is such a thorough expert in the craft that he's able to break down all of the genres and their component parts and what audiences expect from them. But I was going to be a little disappointed if this was all the book was, and I was happy to learn that it wasn't. For one, it was also a time capsule of how writing worked back in the day. Think about pursuing a career in novel writing and not having a computer. You had to work on a typewriter. Then imagine finishing your manuscript and needing to revise it and then make a copy of the physical thing to send off to agents. It seems like it was a nightmare, but those writers of the era made it through.

One bit of advice that I was most surprised by is that he tells people not to revise or rewrite. As a professional writer, you should be able to deliver it right the first time.

That's something I'd never considered and I'm trying to be more cognizant of it now that it's been pointed out to me. It's something I find easier with short stories than novels, but I've only written almost 13 novels, not 40. Maybe when I get to that point, I'll be there.

But there was an exercise in it for finding inspiration I found fascinating and want to try it for my next Patreon short story. It was really a word game that forces your imagination to come up with a story based on unexpected titles. The keyword Koontz chose was "Dragons" and came up with a number of permutations of disparate word combinations using it until he hit upon the title "Soft Come the Dragons." This led to a story he wrote because the title just screamed that story to him. He also said this method would yield him about three stories per keyword, more than that and he'd be cannibalizing his own ideas.

I figured I'd try the same thing here in this and come up with the title for the next short story I'll write. I've already written about dragons for my Patreon, and people seem to be enjoying science fiction, so I figured I would pick a word that might be able to have some science fiction connotation behind it. Though maybe the title I come up with might work better as a fantasy story...

To start, let's come up with words that don't typically describe robots and pair it up there.

What about some phrases using the word robot that might not seem typical...

Or maybe even transforming the word into something else...

And as I do this, I realize I've got like three or four stories in here, easy. I really like the Wizard and the Robot, the absurd juxtaposition of it could work with anything. A clown. A Barbarian. A King. A samurai. The Last Robot has a story leaping out at me, too. And so does the title Astrorobotica. It gives me this feeling of a far, distant future where everything is brightly lit.

It works. It works really well. It's definitely a technique I'd never considered before and it will definitely be something that I'll keep in my tool box. I almost never start with a title, namely because I'm so bad at them. I mean, you can see that. But playing this as a word game makes a lot of sense. I'll do this in my notebook (rather than here on the Internet for people to see) and keep some ideas when I feel like my quill of creativity has run dry.

But I would never have stumbled on this idea if I hadn't obsessively been going through books about writing, constantly learning to better my craft.

I would hope you do likewise.

--
As for my own writing: I crossed 100k words on my NaNo novel, and that book is still going strong. I'm really excited for it, but I'm also excited to be finished with it and get something else done, too.

I had a piece come out for StarWars.Com about Holocrons that you can read here.

There's a lot of Rogue One content coming from me quickly, too, for a lot of different outlets. In fact, this weekend I'll be heading to the press junket and next weekend I'll be on my way to the premiere in Hollywood, so... Keep an eye out.


--
As a reminder: Please join my short story Patreon here.  Your contributions to the Patreon help me write more like this.