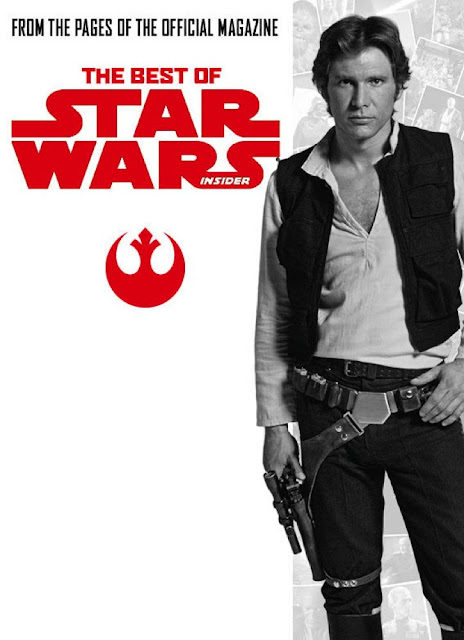 I am proud to announce that I have a new book coming out at the end of the month. I was asked to write 20+ new essays for The Best of Star Wars Insider Volume 2.

This series collects some of the best work that has appeared in the pages of Star Wars Insider and I was asked to come aboard for this volume to add new context and my own experience to introduce each piece. It was a lot of fun to work on, even though the deadline was incredibly tight.

This is one of those top secret projects I worked on ages ago and I'm finally able to talk about it. It was late last year,  even before The Force Awakens had come out, that I was doing the brunt of my work on this. It was a lot of fun and challenged me in a lot of ways.

One of the ways it challenged me was the fact that I had to read a piece, come up with a take on what I could add to it, or what I could say about it, then turn over a piece fairly quickly. Over and over and over again. It's the sort of thing I do regularly with my City Weekly column, but that ranges from weekly to monthly. I had to do 20+ of these in the matter of a few weeks.

It's also hard sometimes to find something unique to say, or find a story to tell, that's tied to a specific piece or topic. It's a great challenge, and one that I think I'm well-suited for as I've been writing for print weekly's for 7 or 8 years regularly now. It's a thing that happens when you're told, "Your next deadline is for our issue about Pride, do you have any ideas involving LGBT superheroes?"

And then you have three days to come up with something important to say, boil it down to 700-1000 words, and then send it to an editor who is going to scrutinize it and help you shape it in different ways if need be.

It's hard work, but I think it's fun work, too.

The Best of Star Wars Insider comes out June 21 and I would recommend pre-ordering it so it's in your hands as fast as you can get it.  There is a lot of great stuff in there from a wide variety of contributors.

Will this lead to more work in the world of Star Wars? I hope so. It might not be the most glamorous start, but I'm pretty proud of it.

I also had a lot of fun at Fan Con at the Roy Library over the weekend. I met with fans, signed books, and gave probably one of the most difficult talks about Star Wars I've ever had to give. Not because it was challenging subject material, but because the audience was largely a group of 8-12-year-olds. I'm much more accustomed to speaking to adults about the topic, so tailoring the sort of talk I'd give on the fly to accommodate the interests of the audience was hard. But I think I made it work. All the kids seemed to come by after and tell me how much fun they had and how much they learned, so that's all that counts.

As for my other writing, I'm still working on revisions for my epic fantasy novel. Still waiting to hear back on a whole bunch of queries. Still cranking out columns for my regular outlets. It's a slow grind, but it's the life I lead.

I'm working on storyboards for my short film and still outlining the next novel, too. So we'll see where that gets me.

The latest in my Cinema Behind Star Wars column also came out. This time, I tackled Kubrick's Paths of Glory.
Next week, I'll be at Origins Gamefair teaching classes about writing, so if you're in the area of that convention, it would be great to see you. I'll be selling and signing books as well.

Because of that, I'll have to miss Write Out Loud! at the downtown library in Salt Lake City, but you will be in capable hands if you make it to that. It's a fun event and worth it, even if I'm not there.