Inspiration on a Deadline 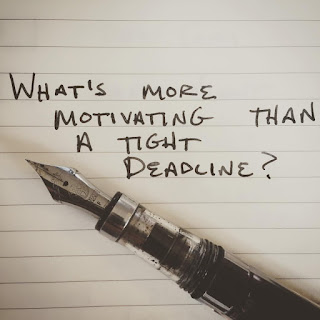 I'm often asked how I can find inspiration so quickly, especially when I'm working on a deadline. I'm often told by others that they could never work creatively on a deadline because they have to wait for inspiration to hit.

To the former, I'll explain my method for finding inspiration on a tight deadline. For the latter, I offer this quote from Neil Gaiman:


“If you only write when you’re inspired you may be a fairly decent poet, but you’ll never be a novelist because you’re going to have to make your word count today and those words aren’t going to wait for you whether you’re inspired or not. You have to write when you’re not inspired. And you have to write the scenes that don’t inspire you. And the weird thing is that six months later, a year later, you’ll look back at them and you can’t remember which scenes you wrote when you were inspired and which scenes you just wrote because they had to be written next. The process of writing can be magical. …Mostly it’s a process of putting one word after another.”

I really think the biggest hurdle you have to face in meeting deadlines and finding inspiration constantly is to be working every day and on different projects so you're always in a different phase on something. For example, right now, I'm working on outlining my next novel/serialized story project, revising my fantasy novel, and drafting a short story. I also have a slate of non-fiction articles I'm working on on a deadline.

It makes it easy to write every day, but how do I stay on a deadline? Especially a tight one?

These are my methods and they've helped me keep a reputation where I rarely go over a deadline. And if I miss a deadline, it's usually on a non-fiction piece where the subject has been less than cooperative and I'm not in control of that. And if I am going to miss a deadline, the editor knows it before the deadline.

But I'm curious to hear about how you cope with these problems. What do you do to stay motivated on a deadline?


--
As for my writing, I'm still toiling away on the epic fantasy revisions. And I'm trying to draw people to my Patreon. If you want to vote on the next short story I'll be writing, there's still a few days left to contribute and vote.

There are a lot of things going on, too. Hopefully I'll be able to talk more about it sooner rather than later.
--

As a reminder: You can join my short story Patreon here.