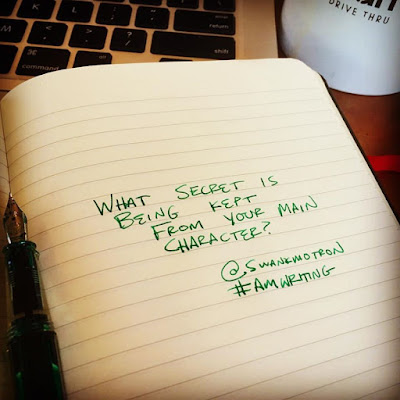 Origins Game Fair came and went over the weekend and I had a lot of fun. I met a lot of fans and got to hang out with one of my favorite groups of writers. I also got to teach a lot of fun classes about writing, which are always as illuminating to me as I hope they are for the audience.

One thing that struck me as I was there, though, is that all of the writers I know are incredibly curious and inquisitive. They ask a lot of questions about how things work and why. It makes more sense every year why a gaming convention is the site of one of the best writing conferences in the country. Aside from the fact that the driving force behind the Origins Library is Star Wars author Michael Stackpole and he got his start in the world of gaming, we all like to see the mechanics of a thing. Playing games and discussions of game mechanics happened almost as frequently as discussions of writing and the business of writing. And it made a perfect sort of sense.

Because we have to know, at least on a basic level, how things work so we can communicate that succinctly to a reader.

I realized that we, as writers, were constantly asking each other questions about things. Other writers. The business of publishing. Game mechanics. Writing theory. Our flights. Why the TSA is so dysfunctional. Kids. Family. People we know. Other writers. Anything. Everything.

It's not in a way that was just small talk, either. Discussion of these topics was deep and measured. Never was there a feeling that conversations were just about passing the time, each of them was about greater understanding.

Hanging out with other writers can make you forget how hard it is to have a good conversation and learn something from other people. I find within 10 minutes of being near a writer you know, you're asking each other what you're working on. You're talking about the challenges of your story and the other person is helping you diagnose the problem you have.

Try chatting with someone about the weather after that. I think this is why small talk feels like torture to me, even though it's something expected of in society. The trick is to stay curious. Don't be afraid to ask people questions. We're constantly learning from each other, and we're never going to learn enough in our lifetimes without asking questions of people. You'll never know what a person is thinking if you're not asking them. And you'll never be able to tell if they're lying to you about it if you don't learn how to read a person well enough.

That was the biggest takeaway from Origins from me. Be constantly thirsty in your quest to learn from other people. Don't be afraid to ask questions and don't be afraid to share stories. And if this isn't a skill you possess and you still want to be a writer, I won't say it's impossible, but I will say you have an uphill battle.

It's not the sort of thing I want to hear, per se, because I want to shut myself up in my office and just write all the time without much social interaction, but it's important in the life of a writer.

Talk to other writers. They understand you better than anyone else can.

Learn from their curiosity.

--
In my writing, my latest piece for StarWars.Com came out. It's about the influence Robotech has had on Star Wars.  And since those are two of my favorite things, it's been a lot of fun writing about them together.

I've been binging Robotech books lately, too. Half of that is for pleasure, the other half is for a side-project that will hopefully be announced sooner than later.

Today also sees the release of The Best of Star Wars Insider Volume 2, which has a LOT of new material written by me. Be sure to pick up a copy at your local bookstore, comic shop, or even on Amazon.

I might also be working on a longer term serial project via Patreon, and a monthly short story magazine for Silence in the Library. (For the latter, sign up here, it'll be launching sooner rather than later.)

I'd ask if you would be interested, even, in reading short stories and serialized fiction from me exclusively for Patreon backers every month. I'm seriously considering doing that to supplement my writing income. If it's something you'd back, don't hesitate to let me know. I'd really like to gauge interest before I jump into it.