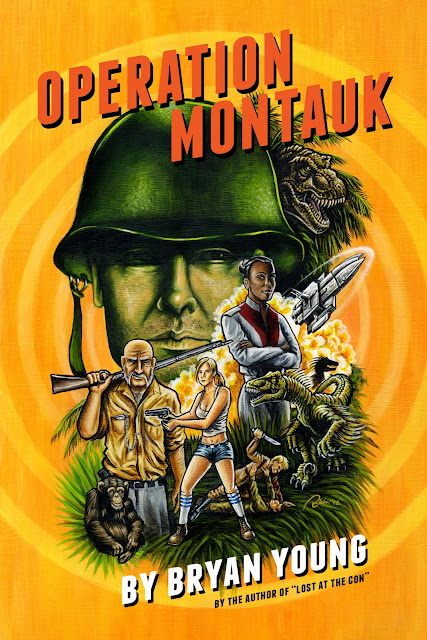 Operation: Montauk, which will make its official debut at Origins Game Fair at the end of the month, is now available for pre-order.


Operation: Montauk is a time-traveling science fiction novel patterned after the pulp-adventure stories of the 1920s and 1930s.

Lost in time after a failed attempt to kill Hitler before his rise to power, World War II soldier Cpl. Jack Mallory finds himself stranded, his whole team killed, nearly 100 Million years off course. Together with a group of other wayward time travelers, Mallory has to fight to survive in a hostile environment swarming with dinosaurs. Desperate to find a way home, the community of lost travelers searches for any solution that might send them all home and unlock the secret that shipwrecked them on the shores of time...

But the jungle holds a secret from Mallory's future-past...


I wrote the book with my son in mind, so it's an all ages sci-fi adventure I hope you'll all enjoy. It's being published by "Silence in the Library", a publisher dedicated to all-ages sci-fi and fantasy.


In addition to premiering the book at Origins, I'll be appearing on writing panels and signing books.

To preorder, simply choose your method of shipping or pickup and your copy will be secure.

After Origins, I have book signings planned in Downtown Salt Lake and Father's Day Weekend I'll be at Denver Comic-Con in the artist alley, signing books.  If you're going to be in any of these places, forgo the shipping costs and click the "pick up" option.

For those of you interested, the first chapter has been added as a bonus to the Amazon Kindle version of Lost at the Con.