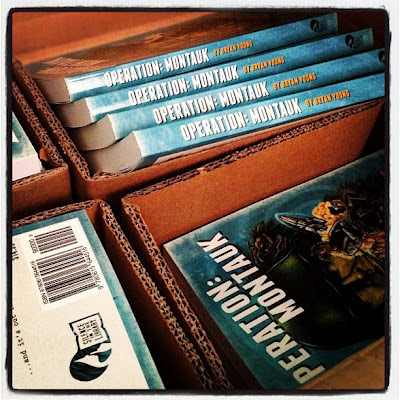 The first print run of Operation: Montauk has arrived and the pre-orders will be shipping out over the weekend. (It's not too late to still pre-order.)

From Friday, May 25 through Sunday the 27, I'll have a table at CONduit in Salt Lake City. It's being held at the Radisson downtown on 215 S. West Temple. The special guest is Tim Russ, who played Tuvok on Star Trek Voyager.

I'll be appearing on at least three panels:

Saturday: 10am - Web Based TV productions
Sunday: 10am - Getting Your Stuff Published
Sunday: 12pm - Starship Troopers: Fascism vs. Socialism in SF/F

I might or might not have a copy of Operation: Montauk on me for the first person who asks to get one.

Then next week, May 30-June 3, I will be off to Origins Game Fair in Columbus, Ohio for the official premiere of Operation: Montauk. I'll have a table at The Library and will be on quite a few panels. You can check their website for the details.

As soon as I get back, I'll will be launching the official Salt Lake City premiere of Operation: Montauk at The King's English Bookshop. It's June 8th at 7pm, and they're located at 15th East and 15th South. I will do a reading, light refreshments will be served, and then I'll be signing books. I'd love to see as many of you as possible out for that.

The next day, June 9th, from 12-3pm, I'll be signing copies of Operation: Montauk at Dr. Volt's Comic Connection. Dr. Volt's is at 2043 East 3300 South and it's the perfect opportunity to get your comic books and grab a copy of the book.

The week after that, June 15-17, I will have a table in the Artist's Alley at the Denver Comic-Con. I'm told I will be on a panel or two, but that hasn't been finalized yet. I'll have copies of Operation: Montauk, and DCCC will be the premiere of the audio-book of Man Against the Future, as read by Marcus. I hope to see as many of you out there as possible.

I'll continue updating you guys as more signings, events, and reviews of the book are added.

See the giveaway details at Goodreads.